I was catching up with [url=http://www.gapyear.com/members/Andy]Andy[/url] (of ex-gapyear.com fame) over drinks and tapas one afternoon last month, and he lost a (slightly distasteful) £5 bet to me (on the length of Rolf Harris’s sentence). As we share a love of movies so bad they are good, he proposed a great way to paying me back… In crap movies!
We went down to CEX (the local 2nd hand DVD franchise) and scoured the place for a stack of rubbish looking films to watch that afternoon. An hour later, £3.25 down, and 7 films better off, we headed home to watch some of them.
I’m sure there are lots of you who appreciate a crap film as much as I do, so I thought I’d share a couple of highlights, and see if anyone had any recommendations?
——————————————————————————

[strong]Playing God (1997)[/strong]
[strong]Plot:[/strong] David Duchovny is a drug addicted surgeon who loses his license. Angelina Jolie is an eye-candy mafia moll who witnesses him performing an emergency operation after a night-club shooting. The director is a voice-over-obsessed man, more concerned with playing with camera effects and different kinds of wipe, than actually trying to get any emotion out of his wooden cast. Mulder gets drawn into a web of weirdness centred on carrying out surgery in fancy hotel rooms, on behalf of mafia mobsters, before predictably falling for Angelina.
[strong]Highlights:[/strong] All of Duchovny’s voice-over, which is all ridiculously contrived, and delivered with an amazing tone of I’m-only-doing-one-take-and-I-don’t-give-a-shit. The surgery scenes, where random people just seem to have tons of advanced medical equipment just lying around in their houses or hotel rooms. The chat up line “Now I get to use a phrase I always wanted to use in med school: take your clothes off and get under the sheets.”
[strong]IMDB score:[/strong] [url=http://www.imdb.com/title/tt0119906/?ref_=ttqt_qt_tt rel=”nofollow” target=”_blank”]5.6 / 10[/url]
[strong]Enjoyability rating:[/strong] 8 / 10
[strong]Link:[/strong] [url=https://www.youtube.com/watch?v=A2ZCqHe5Rsg rel=”nofollow” target=”_blank”]The whole film is free on YouTube and nobody seems bothered enough to take it down.[/url]
—————————————————————————— 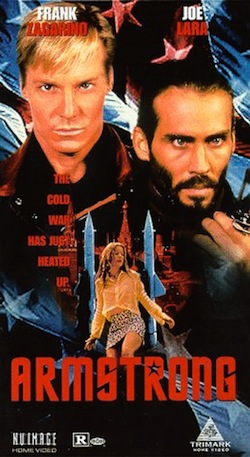 [strong]Armstrong (1998)[/strong]
[strong]Plot:[/strong] A James Bond type character named “Rod Armstrong” is now living in Russia. Bob, a former boss of Armstrong’s visits him in Russia, bringing with him his hot young wife, and a VHS tape who containing evidence of a Russian nuclear stockpile being sold on the black market. In what is surely the most 80’s movie plot to make it into the late 90s, Armstrong must fight his way through nameless hencemen to face the corrupt warlord “Zukov” in a series of stand-offs that have to be seen to be believed!
[strong]Highlights:[/strong] Every action sequence, all of which are seriously over-choreographed and wonderfully cheesy. The lines “No speak English good!”, “Then speak English bad!” The scene where Bob struggles to find a place to hide his massive VHS tape (too big for suit jacket pocket) and ends up hiding it in a VHS player (#90sproblems). The fact that they seem to have spent half the budget convincing the girl who plays Bob’s wife to run around Russia in a see-through blouse and no bra, for a full 20 minutes. The fact that Armstrong’s hair is always perfect. The fact that this was clearly meant to be a franchise! Everything about the Colonel Zukov character!
[strong]IMDB score:[/strong] [url=http://www.imdb.com/title/tt0139029/?ref_=ttpl_pl_tt rel=”nofollow” target=”_blank”]4.0 / 10[/url]
[strong]Enjoyability rating:[/strong] 7 / 10
[strong]Link:[/strong] [url=https://www.youtube.com/watch?v=nRXsQNpu48E rel=”nofollow” target=”_blank”]Trailer on YouTube[/url]

That Duchovny flick looks amazing! I’m totally blocking out a youtube evening to watch that!!!
Here’s another one for the list…
—- 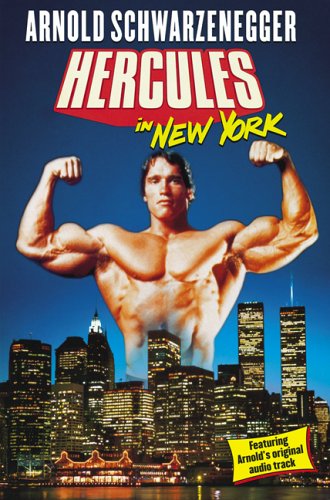 [strong]Hercules in New York (1969)[/strong]
Plot: Basically, exactly as it sounds. Hercules (played by Arnold Schwarzenegger) gets sent to New York for reasons that are either unclear or forgettable. He buddies up with a squeaky Jewish guy called Pretzie and becomes a professional wrestler. This angers the Gods and one of them is sent to Earth to stop him. A bunch of other stuff happens which is just as irrelevant. Basically it’s Arnie in his Mr. Universe days, desperately trying to act, before he’d grasped how to speak English. They dubbed over him originally, but the version with the original Arnie voice is the one to seek out. Make no mistake, I bloody love Arnie, but this was too much too soon for the guv’nor!
Highlights: Arnie in a toga. The fact that the pretzel selling dude is called Pretzie! The fact that there is literally nobody in this film capable of acting. The weird crappy lute music! Arnie fighting a (man in a) bear (suit)! 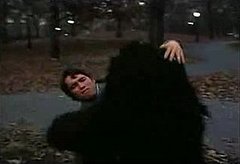 I absolutely LOVE Hercules in NY! Arnie was totally funny, even before he realised he could be deliberately funny!
You guys might also like the ‘How Did This Get Made?’ podcast which has a load of stuff like this on it.
[url=http://www.earwolf.com/show/how-did-this-get-made/ rel=”nofollow” target=”_blank”]http://www.earwolf.com/show/how-did-this-get-made/[/url]
The one about the Britney Spears movie had me in tears! 😆

Totally! I love Hercules too.
That podcast is brilliant as well. A friend of mine put me on to it just recently, so I’ve only listened to the [em]Mr. Nanny[/em] and [em]Super Mario Bros.[/em] episodes, but I love how deeply they de-construct the movies.
I’m going to listen to the [em]Mortal Kombat[/em] and [em]Street Fighter[/em] ones soon I think. The same friend has also advised me to watch [em]The Room[/em], so I think that might be my plan for the weekend! 😛

I honestly think I like bad-good movies more than actually good movies.
The best I’ve ever seen is:
[strong]The Ultimate Weapon (1998)[/strong] [strong]Plot:[/strong] When mercenary “Hardball” Cutter discovers that the team he is working with is actually a group of IRA gunrunners, he decides to put a stop to their plans. Furious with Cutter, the gunrunners target him, his partner, and his family.
It has everything a bad-good movie needs: AWFUL acting, terrible dialogue, a story that makes no sense, laughable action, American actors trying to do Irish accents, obvious stunt doubles, props that break and bend… it’s magnificent.
To be honest, Hulk Hogan’s entire filmography is a treasure trove.

Definitely agree with Cry Baby
Mine would have to be The Leprechaun (I’m only counting one but this is a trilogy – I take that back, upon further research they made six films). 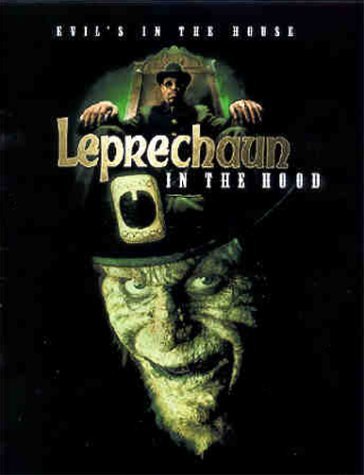 Plot: An extremely controversial film about a stereotypical Irish Leprechaun who terrorism members of a family as he searches for his Pot O’ Gold.
Highlights: Jennifer Aniston debut as ‘Before they were famous’ and the politically incorrect representation of dwarfism and the Irish culture.
Crazy fact: The dwarf is THE Warwick Davis!! Why have I not read the Wikipedia page before!!! (Another ‘Before they were famous’)
Here are some ‘greatest quotes’
[url=https://www.youtube.com/watch?v=C21l29hurRI rel=”nofollow” target=”_blank”]https://www.youtube.com/watch?v=C21l29hurRI[/url]

[strong]The Room (2003)[/strong]
[strong]Plot:[/strong] It’s difficult to describe this film in a way which even starts to capture what it really is. Wikipedia calls it an “independent romantic drama film written, directed, produced by, and starring Tommy Wiseau” but that barely scratches the surface. Entertainment Weekly called it “the Citizen Kane of bad movies” which comes closer, but still misses the mark somewhat. In essence, it is the [em]magnum opus[/em] of auteur film-maker Tommy Wiseau, who should never really have a [em]magnum opus[/em]. The central premise is a roller-coaster ride in which Johnny — literally the nicest man in San Francisco (played by Wiseau, of course) — deals with the turmoil of his deceptive long-term girlfriend. I don’t want to give too much away, but at times it feels less a plot, and more like a therapy session played out with a (low-end) Hollywood budget.
[strong]Highlights:[/strong] From the moment the film opens with 3 different “Wiseau Films” production logos (presumably he struggled to pick a favourite), you know you’re in for a treat. There are almost too many highlights to start picking favourites; everything about this film is a joy! The acting and direction are in equal parts, both abysmal and delightful. The soundtrack and the sex scenes are laugh out loud funny. And there are of course all of those golden moments where the characters randomly go and throw a ball around for no reason, or reveal important facts about their life, which bear no relevance to the plot, and will ultimately remain unresolved plot arcs.
[strong]IMDB score:[/strong] [url=http://www.imdb.com/title/tt0368226/ rel=”nofollow” target=”_blank”]3.5 / 10[/url]
[strong]Enjoyability rating:[/strong] 10 / 10
[strong]Link:[/strong] [url=https://www.youtube.com/watch?v=yCj8sPCWfUw rel=”nofollow” target=”_blank”]The full length trailer.[/url]
——————————————————————————
Needless to say, I can’t recommend this film enough!
If you never only ever see one more bad movie, make sure it’s this one.
[strong]Seriously, watch it![/strong] 🙂

Tommy Wiseau has a TV series that’s supposed to be available any day now. It really should be something special!