Awesome bike ride in the south of Taiwan

I’ve been in Taiwan for two days now and I’m still undecided. I think this could be down to where I’m staying though rather than the country as a whole. My hostel advertised itself as a ‘surf hostel’ but it’s 15 minutes by bus to the beach which is a bit rubbish. I’m meant to be in Kenting but I’m actually in Hengchun, as it also advertised itself as being there too.
But anyway, I’ll stop my moaning.
Today I’ve been on an amazing cycle ride. I actually wanted to rent a scooter and was all geared up for getting my first one but it turns out you have to have some sort of license before you do. But as usual, turned out for the best, and I’m buzzing from cycling 28 miles around the south of Taiwan. 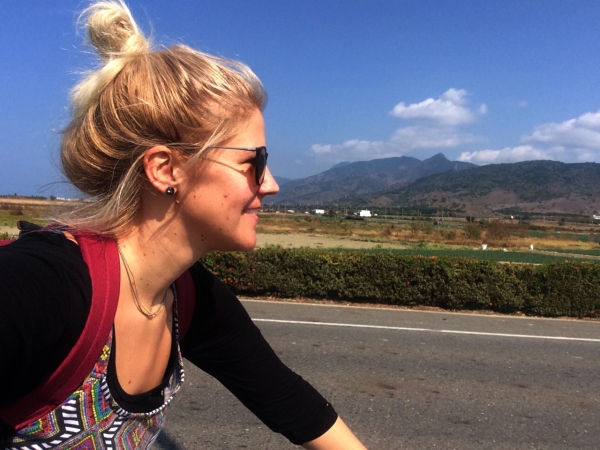 If I’d have known before I started I was going to do 28 miles I can guarantee I wouldn’t have bothered, but stage by stage it’s been great!
My first stop was the Fuan Temple. The amount of gold in there was crazy – it was huge! I stood and watched people give their offerings – Mars bars, snickers bars and fruit were popular – for about 10 minutes and then I was done. Probably sounds bad but I’m not really interested in hanging around temples and religious buildings, they make me uncomfortable – especially when you see people who obviously don’t have much giving it all to ‘the gods’.

I was really surprised at how quickly I got there from where I was staying in Hengchun – along really nice, flat roads – so I decided to carry on to the hot springs. I passed this incredible river along the way and couldn’t help but to stop and take a picture. 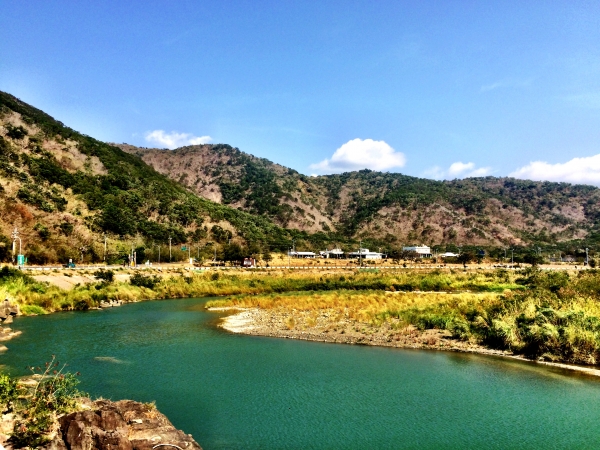 I easily made it to the hot springs and was pleased to note – after the nudity of Japan – that everyone was wearing their swimmers. I spent a good hour here getting in and out of the different temperatures. One of the pools was 42C!
After a delicious steamed pork bun for lunch and the best discovery ever, chocolate dipped dried mango, I decided to head back. I went by the side of that colourful river again and monkeys swung from the trees out on to the road. Amazing!

I went back via another temple that I could see over all the other buildings thanks to the ridiculously huge gold religious statue on top.
Then it was a long route down the coast for me. I went in and out of little towns and saw people out fishing as the sun was setting. I decided to stop off and enjoy the incredible sea view, and the sun, by reading my book for a bit.
The loop ended back at Hengchun Township, 6 hours and 28 miles after I rented the bike out in the morning. Great fun and beautiful scenery, all for 300TWD – £6!