Budapest is the proud owner of the biggest synagogue in Europe. The Great Synagogue, or Dohany Street Synagogue, is absolutely stunning – you can see the evidence below. But what I wanted to blog about today is the Rumbach Synagogue. Just down the street from the ‘Great’ one it’s been cast aside by tourists, locals and the government alike in favour of the more glamorous, more famous one. In fact this old one has only recently been opened to the public – it was originally thought no one would want to even see it.
I didn’t actually go in the big one – queues, cost, time and not enough interest stopped me – but I did pay the 800HUF (£2) for the smaller one, just to support the underdog and see inside.
The Rumbach Synagogue had first been brought to my attention by Antonia on the Alternative Budapest walk I’d done a few days before. She told me how after it was bombed in World War II it was then used to store bricks for years. Just a few years ago it was cleared out and seeing as the Jewish Festival was on at the moment they’d opened it up for people to see… basically how empty it is, as well as a small exhibition about Jewish history. 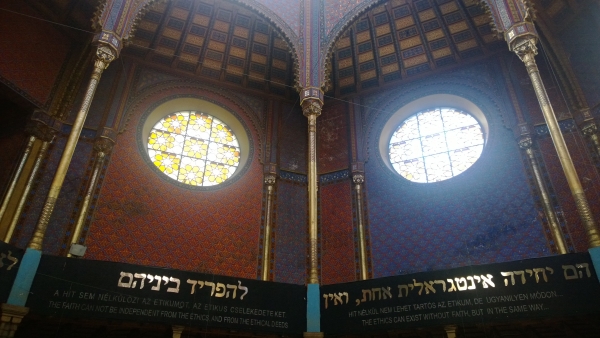 I walked in not really knowing what to expect. In just a few steps I’d come to the centre, it was easily higher than it was wide. I walked the room from picture of person to picture of person just looking at the familiar dress from history books – all the writing was in Hungarian so I had no chance there. 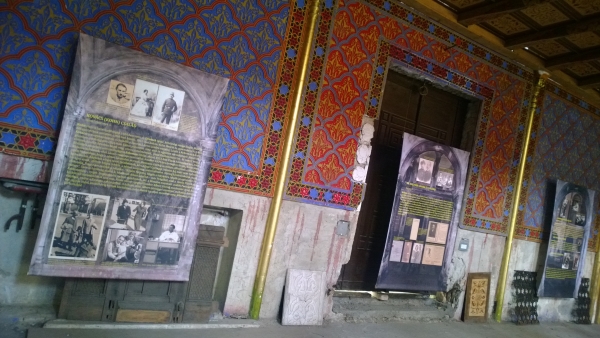 There was another couple in there, reading the displays, but I sat on the floor right in the middle and just stared up to the ceiling. I thought about all the history that had taken place within the walls over the years. The synagogue was built in xxxx and had seen two world wars as well as all the civil unrest through the years.
I’m not a religious person – religion both saddens and fascinates me – but I sat and contemplated my thoughts and beliefs for over an hour on the floor of that synagogue. The Rumbach Synagogue felt peaceful, and I enjoyed being left to it, unlike the busyness and forced opulence of St Stephen’s Basilica across town. 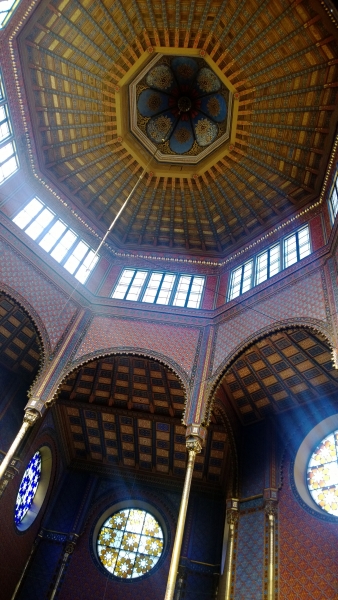 The room was cool and dark, there was no artificial light, only the dimming sunlight coming through the stained glass windows above. Fallen sections of the wall were left around the room, floorboards were missing and rubble surrounded me. For some reason those are the kind of places I like best and where I could spend hours contemplating whatever was on my mind at that point.
My thoughts and theories came easily in there. I left feeling my brain was a little more organised, although still confused, about the concept of religion and it’s affect on the present around the world.
If you’re visiting Budapest any time soon – which I can’t recommend enough – you should definitely go and see the forgotten synagogue, and give a thought to all the forgotten people of the world too.