I went to the Luche Libre in Guadalajara the other night, it was so cool!
It was in a pretty sketchy part of town but lucky for me I had made friends with a  Mexican and someone who was studying Spanish in Guadalajara so they looked after me. I wasn’t allowed to speak any English from the car to the venue to avoid looking like a tourist. Sure the foot taller and blonde hair didn’t give it away.
We got in and the action had already started. They have a few warm up fights before the big one and they were right in the middle of kicking the hell out of each other. 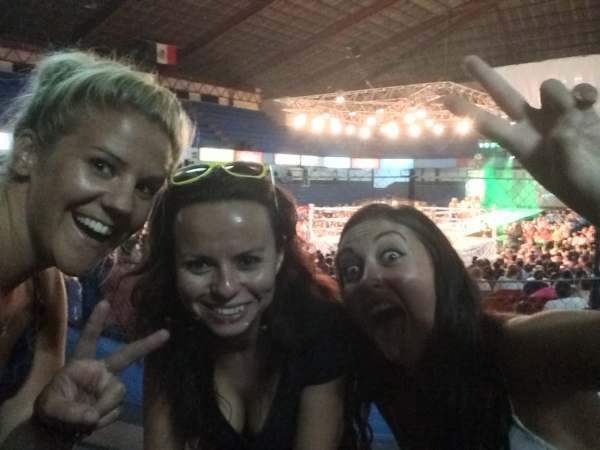 We got some beers – two Coronas poured into a huge plastic cup was the norm – and settled ourselves in the cheap seats (70 pesos / £3.21). The expensive seats – the ones around the ring – start verbal fights with the cheap seats and vice versa. There’s a huge fence between us and it’s all just banter. It was great fun copying what the cheap seats were saying and shouting it back to the posh ones. I had no idea what it was I was shouting, but without a doubt it was all kinds of swear words. 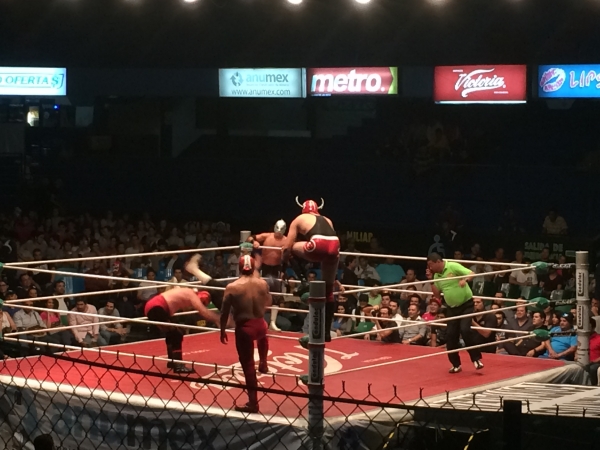 In Luche Libre it looks like they’re absolutely kicking the whatever out of eachother but in actual fact they’re trained to not hurt their fellow fighters. I can’t imagine they got out of the ring not in pain though. There are six of them in the ring at the same time all trying to win.
When the women came out to fight there was a ‘fit one’ – think Jet off Gladiators – and there was a Japanese one. Everyone was whooping the ‘fit one’ so she did a bend and snap thing, like on Legally Blonde, and as she came up she stroked her hair teasingly and bought her head back. Then the Japanese one just booted her in the face and then the chest. Ooo that had got to hurt.
And the crowd were going wild!
They were shouting all kinds of abuse at the Japanese one. I probably don’t want to know what it was. 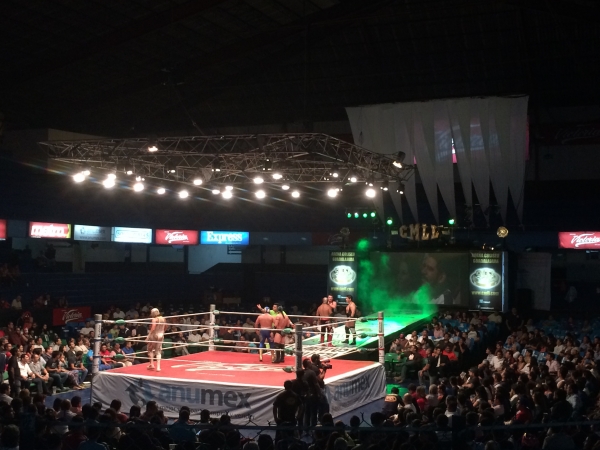 Unfortunately we’d already had dinner before we went out but they were coming round with all kinds of delicious food – popcorn, huge donuts, nachos, tacos, all sorts.
And then came the time for the big fight. More fit girls came out and did a little dance on the runway to announce the arrival of the fighters. One by one they came out from the smoke. They were loving the theatre of it all.
Now the big fight was huge. Six big men kicking, smacking, punching and slapping the hell out of each other? Very entertaining.
No idea who won in the end but it was definitely a night I’ll remember for a long time!