Overheating in a Temazcal

I went in a temazcal the other night. Nearly died I swear. It’s like an igloo but with bricks rather than ice. It’s a traditional thing in Mexico and other south American countries. People will gather together and sit in there around a pit. As the ceremony goes on more hot rocks are piled on and the man leading it added steam. 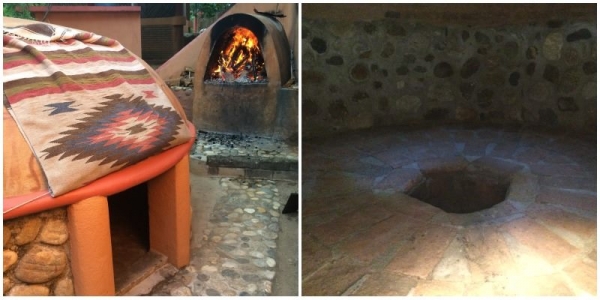 When I got there I definitely panicked. Seeing that little door and knowing that was the only way sparked a claustrophobia I never knew I had. But I’m travelling to experience new things so I decided to throw myself in. Not literally.
We stripped down to our swimmers and one by one piled in. In the end there were about 12 of us in there closely squashed and with our slippery naked legs practically touching. Eww.
The leader, Alessandro, bought down the cover over the door and we were in darkness. He explained what was about to happen and then we went round the circle revealing our name and about why we were there and what we were thankful for. It was getting hotter and hotter as after every person he poured more water on the hot rocks steaming it up.
There was a little chimney at the top to let some out but most of it came right back at us.
The ceremony was in 4 parts and he told us we could leave at any time. I was trying to be hardcore and didn’t leave after the first part, neither did anyone else. Halfway through the second part I was close to collapsing, or crying. I was SO hot. SO sweaty. And felt disgusting. I was concentrating on not being sick rather than the sacred words coming from him.
He was encouraging us to breathe heavily and some woman next to me was orgasming all over the place. It was making me feel even more sick. I really wanted to leave but didn’t want to disrupt everyone as it seemed like everyone else was having ‘a moment’.
I counted to 100 and promised myself that I’d leave when I did. But I made it to the centurion and still bailed. He made us all hold hands, which was really uncomfortable in the position I was in and breathe even more. My knee was seizing up but there was nowhere to stretch it. I needed to get out!
In what seemed like forever he started telling us how he was going to open the door. “I am going to open the door… “When I open the door…”
“Ah open the fucking door!” (in my head)
He finally opened the door and I launched myself out like a caged animal. Ah, sweet, sweet fresh air.
I headed straight for the shower but couldn’t face getting right under it straight away so just sat on the cold tiles on the floor. I felt awful. I realised that everyone else was coming out too, which made me feel better. Only about two people managed to stay the whole time.
The only spiritual moment I had was thanking god I was out of the bloody thing.
It took about 10 minutes on the outside to start to feel normal again.
I’m glad I did it. It was an experience, but never again!