I’m so tired. My body hurts, my brain hurts and I’ve sworn to myself that I’ll never drink again. Of course that will last only a few days, max. I’ve spent the last five days partying in San Pedro, round Lake Atitlan, with some truly awesome people. In fact I didn’t actually do much else but party, recover and then party again. I know, typical gapper. It was so much fun though.
It took ages to get there, as in two days, so by the time we did make it it was definitely time for a drink. There’s a really cool vibe around San Pedro. It’s apparently the cheapest place in the world to have Spanish lessons so by day the travellers are buried away in their homestays, studying hard, and by night they’re ready to let their hair down and knock back the 25Q litres of beer (£2).

One of the coolest nights out in San Pedro was the Fe pub quiz. Thanks to the super funny MC (a dude from Manchester) the place was packed. In our team of five we tried our hardest on the quiz, although with all the film and general knowledge questions I wasn’t much help. I need music and celebs before I can join in.
Every so often the MC would shout ‘lake jump!’ and if you jumped in the lake out the back, fully clothed, you’d get 100Q (£8). In my eyes it was definitely not worth it, as anyone that did it ended up having to go back home to get changed as it was too cold to walk around wet. But if you think that’s two nights’ accommodation in San Pedro, it could be worth it.
We came 6th out of about 18, so not too bad but we didn’t win anything either. The overall winners got 1000Q – that’s a lot in San Pedro! It was an awesome night, that for my friends and I didn’t end until 6am. 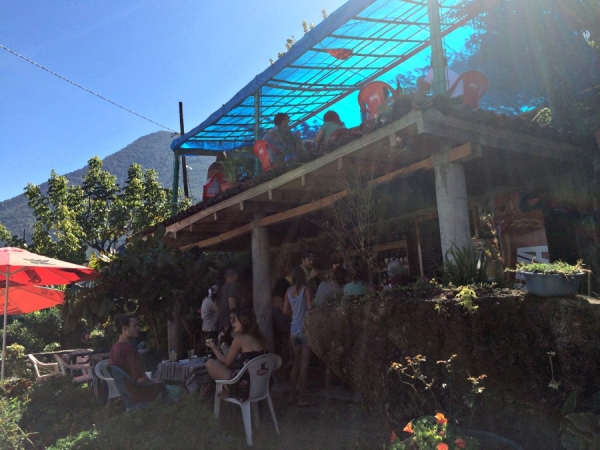 I’ve been pretty crook since then actually, must’ve been something I ate.
Speaking of eating, yesterday I went to the Smokin Joe’s all you can eat BBQ. It was so cool. The crowd surrounded two swimming pools, which actually looked pretty sketchy but it added to the effect, and you could help yourself to the meat and sides. One plate each but that was more than enough, you could pile it up and then get a takeaway box if you couldn’t finish it.
Other foodie delights included the veggie burrito from the restaurant next to the tattoo shop (forgot the name, sorry) and the fish tacos from Buddha Bar. Phwoooar, they were so good. I tried the falafel at Shanti Shanti, and the falafel from Hummus Ya. Again, I’d recommend them both.
I met so many cool people during my five days of fun in San Pedro and I’d definitely recommend it to anyone looking for a good, boozey time. If you don’t like to party, you can always go to San Marcos across the lake. There yoga, healing and alternative therapies await.