The Free Walking Tour in Sofia

I went on a free walking tour in Sofia yesterday. I’m getting well into the free tours, I did one in Brasov too which was really good. They’re so good for getting to understand a little about the city and being able to put what you’re seeing into perspective. 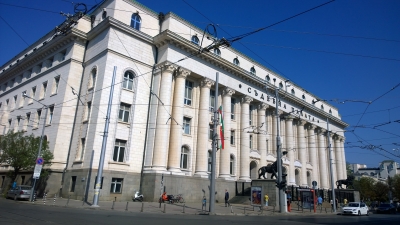 The one in Sofia was pretty busy with around 40 people so they divided us into two groups.
We went off with Niki who’d lived in Sofia for six years and was studying architecture. He really knew his stuff.
On the tour we saw…
1. Sveta Nedelya Church
2. Coat of arms of Sofia
3. Saint Sophia Statue
4. Saint Joseph Catholic Cathedral
5. Church of St Petka of the Saddlers
6. Central Department Store
7. Banya Bashi Mosque
8. Sofia Synagogue
9. Council of Ministers
10. Communist Party Headquarters
11. Ancient Serdica Open Museum
12. Rotunda of Saint George
13. National Archaeological Museum
14. Bulgarian National Bank
15. National Art Gallery (Former Royal Palace)
16. Ethnographic Museum (Former Royal Palace)
17. Georgi Dimitrov Mausoleum
18. City Garden
19. Museum of Natural History
20. Russian Church and Military Club
21. Hagya Sophia Church
22. Synod Palace
23. St. Alexander Nevsky Cathedral
24. National Assembly (Parliament)
25. Palace of Justice
26 Greenwich Books
27 Amara Yoga
28 Pizza to Go
29 Ivan Vazov National Theatre
It was a great introduction to Sofia. I went to the 11am tour – there’s one at 6pm too – which meant I had plenty of time to go back around and actually see inside some of my favourite favourite stops. I went back to the Hagya Sophia Church, and of course, I had to go and take a look inside the St. Alexander Nevsky Cathedral – it’s the ultimate icon of Sofia after all. 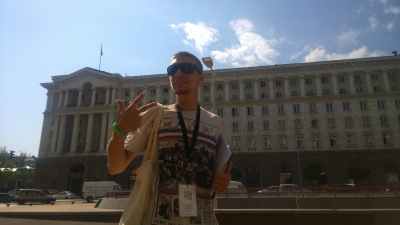 On the tour there was definitely a lot of information to take in, especially for someone who has absolutely no knowledge of Bulgarian history.
26 Greenwich Books
This is a really cool bookstore and cafe in the middle of the main street, Vitosha Boulevard, going through the centre of Sofia. They have an English section (and a toilet) and you can scour through the books with a coffee. It was a great escape from the sun, and I bought The Alchemist, a book I’ve wanted to read for ages.
27 Amara Yoga
Oh this was a delight after walking round the city for the day. Ámara Yoga is a yoga, pilates, massage and beauty venue. Unfortunately I arrived too late for the yoga, pilates and beauty part but I just managed to get a ‘Classic’ massage in. For just 22 euros I was pummeled, shaken out and rubbed all over so skilfully I fell asleep. How embarrassing. I’d definitely recommend getting here earlier and making the most of everything on the menu. It was really chilled out and the people there were lovely. Tempted to go back actually.
28 Pizza to go
For lunch I had one of the best slices of pizza I’ve ever had the luck to put in my mouth. It was huge. It was your average thick base, then it had a layer of salty ham hock, then it had the cheese on top of that. Then on top of that were mushrooms and even more ham. It was delicious, and the equivalent of £1. I saw so many people clutching slices as I sat and ate mine – I think it must be a bit of a legend around these parts. You’ll find it behind McDonalds on Vitosha Boulevard.
29 Ivan Vazov National Theatre
As a nightcap, or just to let your dinner go down, I’d recommend you walk it off with a stroll to the Ivan Vazov National Theatre. The building is stunning and there’s a bar next door where you can knock back a few of the local beers while people watching. I’m currently in training to be bridesmaid so it was all fresh fruit juices for me, but the beers looked like they’d go down a treat in the summer sun. When I was there there was a band belting out a few songs I recognised, a few I didn’t. Either way it was the perfect end to a day in Sofia.